Greetings from Panama. We arrived back here on the morning of December 31st,2019 Just in time for the New Year! We entered the New Year with full expectation of executing the plans that were made.

In February we were excited to have Chick & Polly Myers from West Virginia and Steven Sides from York, Pa. to assist us in our outreach in the Oma District of San Felix. The children’s feeding shelter annex at the Tabernacle of Adoration needed a windbreak constructed and the skills of our volunteers were put to the task!

A week prior to our trek of about 2 hours there, we had a lot of materials and equipment that needed to be put in place. Sam had a truckload of building materials, as well as a truckload of construction equipment, delivered to the site. Jane was feverishly preparing for a VBS for the children of the community from the moment we arrived back from the States. Only days before our departure for the outreach, Polly & Chick arrived, and Jane recruited Polly’s assistance in final preparation of the materials to be used for VBS. You may wonder about VBS on the Comarca. The children are on vacation from school starting mid-December to about the 2nd week of March. The coffee season starts during this time and many of the Ngabe families migrate to other parts of the country as manual laborers to pick coffee and vegetables. So VBS in February is the perfect time.

When we arrived at our lodging location, we ate breakfast and unloaded our belongings. We headed to the work site. Once at the work site, the ladies set up the materials for VBS and the guys immediately geared up for laying cement blocks and the windscreen project. 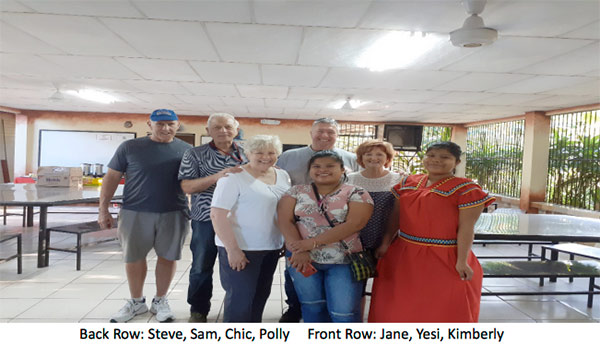 Sam, Chick and Steve were ready for the challenge. All the deliveries had been made to the work site 3 days prior. We made reservations for lodging and meals at FUNDATION NUESTRA SENORA DEL CAMINO (OUR LADY OF THE WAY FOUNDATION) , outreach of the Jesuits, where we usually stay when doing projects on the comarca. It saves considerable time and expenses of traveling to and from home in Boquete.

On Monday morning, February 10th, we left home in Boquete to travel to San Felix. We stopped in the City of David to pick up two young Ngabe ladies, one of whom was in her 3rd year of University studying English. A few days before having to leave for VBS, Armando Dixson (FICADEN) called us and asked if we could let Yesi help us. She attends their church and wanted the experience for her university program. We were elated! We were short a teacher! God provides a teacher and a translator at the last moment! We are amazed at how many times God has provided us with projects and with just what we need! The other young lady, Kimberly, soon to be a high school graduate, had previously helped us with VBS in Llano Tugri a few years ago. She is the daughter of one of the FICADEN members Armando Dixon. We were without a translator because Amelkin usually helps us and teaches also. He had to attend a University program at the last minute, but found a substitute in his place. He chose well. At the last minute, we had to substitute the main leader! We had not met Lucas before. He had to read the Bible stories, lead singing, teach, etc. Fortunately, Jane always write a curriculum in Spanish, and provides them with it prior to the VBS. They follow it well. Of course, Lucas did not receive his until two days prior to VBS! As always, God provides, and He gives us the best! The substitute was great! He handled it like a pro! He could not speak English, but we managed as we always do, and the Bible School was a success. Many heartfelt thanks to the Ngabe teachers who all did a fantastic job teaching all those children! And, to Polly who was also a great teacher and made many friends with the children.

The students came trickling in slowly and class started. The arrival time varied with the children because some walked quite a distance – 30 minutes one way! And most of them had perfect attendance for the three days. The guys made a great deal of headway the first day and set a pace for the rest of the work to be completed by the morning of the 13th, Thursday.

She had hoped one of the older pre- teenagers would be able to memorize it. Lucas reminded them every day. The students did not say much about memorizing to the teachers.

After giving out perfect attendance certificates and prizes, Jane asked if anyone had memorized the Bible verse. 14 children came running to the front of the room! The teachers and Jane looked at each other in shock. Some of the children were small! We had each child recite the verse; they could not miss any part of it. One small child 5 years old, recited half of the verse perfectly! Jane had egg on her face because she had brought only four Bible storybooks for prizes for the verse- there were 10 children who had memorized the verse perfectly! Children of all ages; young seven years old, and pre-teenagers. She had to send more Bible storybooks for the other children- who made sure Lucas had their names written down. They also did not know what the prize was for memorizing the verse.

After lunchtime, we asked the children to stay and not go home yet. We had a special surprise since we did not have time for a snack in the am. Polly said she wondered where the children went after lunch, she thought they may have gone home. They were waiting in front of the church.

We bought ice cream for them, an incredibly special treat. Since there is no electricity in most places on the comarca, and hence no refrigeration, we had to make a car run to San Felix and get the ice cream at lunchtime. Thankfully, we were able to give them ice cream because San Felix was only 7 miles away. They were so happy for the ice cream, something they do not get on the Comarca. We included Mamas too.

Day # 1 &2 of the windscreen construction was rather demanding, including a “field fix” of the cement mixer. Day #3; goals were met and all that remained to be completed was for the guys to return Thursday morning to help install some rain guttering and pack up tools on the rental truck to return home. Our newly certified “wheelbarrow operator”, Steve, drove the truck to the home destination.

Jane, Polly, Chick & Sam, made an overnight stay at Las Lajas Beach on the Pacific and headed back home the next morning. The next week we traveled to some of the interior of northwestern Panama and then on Thursday before our volunteers left we spent the better part of the day at Global Food Providers in Porterillos, Panama , where we helped to harvest mustard greens, spinach, and kale, from the large greenhouses. After harvesting, the greens were loaded onto rolling carts with trays into a dehydrator. After the dehydration process, the greens were ground into a powder and bagged. These powdered greens are extraordinarily rich “super” food for distribution to the Ngabe people; it will be adding nutrition to their diet. 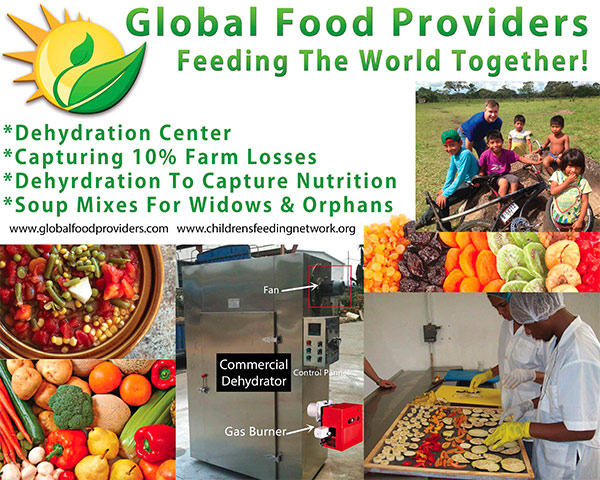 A Message Regarding the Pandemic 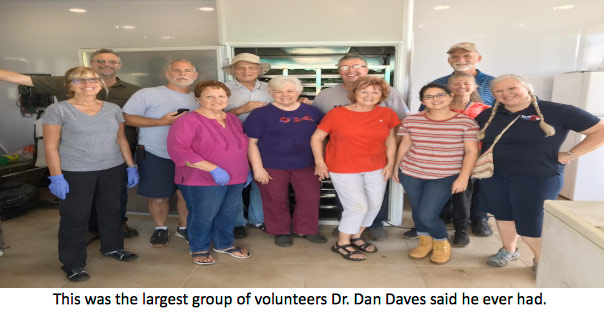 All of our activity was completed as planned and the last of our volunteers from the States, returned home Friday, February 21st..The Corona Virus threat made its way into Panama approximately a week later. Presently men are permitted to shop, go to pharmacy and bank on Tuesday’s, Thursday’s, and Saturday’s, from 11:00 am-1:00 pm. Ladies shop Monday’s, Wednesday’s, and Friday’s, same time limits. Easter weekend and next three weekends were Total Lock Down with no departure from your home to anywhere. The virus has taken a toll on our ability to minister to the needs of the people for whom we serve. We have been keeping in contact with FICADEN (Ngabe Organization)) regarding food on the comarca. Armando said initially the government was delivering food in the mountains via helicopters. The other day he said the government gives $80/month to each family for food. He said the problem is some families (extended) live under one roof and that is not enough money for food for a month. We were able to give $400 to FICADEN through our COTRM Missions program to distribute food on the comarca- they know who needs it most. They were so grateful and thanked God. The comarca is still shut down and we cannot get in. The Ngabes can deliver to their people. The Ngabes shut the comarca down 1 week before Panama ordered lockdown and we see maybe 4 cases on the comarca map, and it looks like near a comarca line- not way up on the comarca per se. We also gave extra COTRM Mission money to Pastor Manuel for feeding the people who are not able to get more food in the Oma area. He has the children’s feeding shelter that we are sponsoring monthly. We are also helping to sponsor six afterschool feeding programs that were scheduled to start when the lockdown was enforced. COTRM completely supplies the school materials for these six programs. Some of the Ngabes lost their jobs and they cannot afford to have that happen. Their wages are extremely low to begin with. Pray for them to be able to recoup somehow. A huge thank you to all our donors! God knew we needed extra funds for times such as these! -To feed the poor and hungry. Deuteronomy 15:7

It has been a joy, even in this time of limited movement, to be able to fellowship with friends and lend our ears to our Pastor’s Sermons back in the States and here in Panama, via Internet and Social Media.

Our prayer is that this “Pandemic”, will quickly end and that all people actively involved with making a daily living being able to go back to work!

Cleft of the Rock Ministries
MENU